Val Starr & The Blues Rocket – Lighter Side Of The Blues will be our Album of the Month for February. 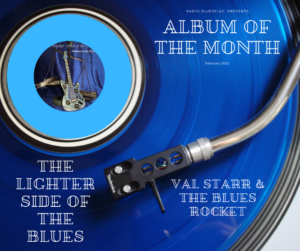 Lighter Side Of The Blues, the new album from Val Starr taps into a melting pot of influences from across the musical spectrum to create her unique brand of California Blues. “It’s a mindset as opposed to a style,” she comments. “I really try to capture the joy that the blues instills in the hearts of those who love it.” As with all four of her previous releases, Val is backed once again by a legit all-star band of west coast blues vets (dubbed The Blues Rocket by Starr because they send her songs into the stratosphere). Lighter Side offers up a baker’s dozen of original tracks that echo everything from traditional blues to ’60s girl group pop to guitar-driven rock and roll. But no matter what the tempo or the direction the songs take, every track has an undeniable groove that radiates with positive energy. “It doesn’t have to be heavy to be the blues.” Welcome to the Lighter Side Of The Blues.